I thought I’d talk a little bit about my process. I teach a course called Ideation and Prototyping to engineering students. It’s an interesting course to teach students. Many of my students don’t think of themselves as creative, nor do they have insight on how to generate ideas. One of the biggest misconceptions is that one has an idea, visualizes it, then generates it literally as they have envisioned. More specifically, it’s a straight line, without any challenges or bumps to generate the output. This is not the case. It’s more like the graphic above, full of bumps, challenges, highs, lows, explorations, experiments, insight, loss and ultimately: work.

I think a good metaphor for realizing an idea is that of looking through binoculars to something way out on the horizon. When you first look through the binoculars, things are quite blurry, as they are out of focus. You see something that is there, but it’s not in focus yet. This is often how it starts. Over time of realizing the idea, one is able to bring it into sharper focus.

I’d like to share a bit of my process with generating the fiber structures that I will be projection mapping the graphics onto the surface, with my piece, Luciferins. Viewers will be able to come up, to gently move the fibers, and to be among them. The viewers’ presence triggers the animation graphics to appear.

Many many moons ago, I began to envision Luciferins.

I sketched it out, as these fiber strips, hanging from the ceiling. They light up as you move through them. (More on the technical aspects and process later.)

I whipped up a sketch in Processing (a java-based coding environment) to simulate it:

Working from there, I nuno felted some silk hankies with wool. (Nuno felting means that you are using wool and a fabric together to create a new fabric. Any porous fabric works, as the wool then works its way through the fabric to bind everything as one surface).

I loved how these came out. Yet, they are super delicate. As I imagine people moving through them, this could be quite problematic. I’ve been making interactive work for a couple decades now, and I’ve seen what people do interactive work. They are nearly abusive to it, as they often are keen to see how they can work the piece either to its limits or to break it. (A grad school professor told us, “Go on the opening night of any interactive exhibition. Otherwise, the piece is not likely to be fully operable.” This is so so true from my own experience of checking out other work in the field.)

I then felted quite a big piece – meaning no fabric and using a lot more merino wool. It was my first piece to felt that was this large. It took quite some time to lay out the wool, and then to felt it.

Laying out the fibers and beginning the felting process. It was so large, and my workspace so small, that I had to work in sections, rolling the work like scrolls.

I loved the way this looked. But it was quite a long process (and I mean long) and physically challenging to create.

So, then I started brainstorming. This is where It got interesting.

I started to hand knit the wool roving. Knitting with the roving was super chunky. I had to find the biggest knitting needles that I could:

These were super fun to make. I would knit these on the subway on the way to visit my grandmother in Queens. It was a solid 90 minute subway ride one way, so it gave me loads of time to focus. I would get lots of inquisitive questions as to what I was making from fellow subway passengers. I had a handful of fun responses, depending on my mood. The truth tended to be too abstract for people to follow, as they were expecting/hoping for something more “cute” and “fun”. “No, it’s not a sweater for my nephew….”

While these were durable, I was not happy with the surface texture. Nor, the readily identifiable visual language of knitting. I didn’t want the graphics that I am programming to have so much to compete with.

So, then I started machine knitting.

Machine knitting with wool enabled me to still felt it down. So, the dropped stitches above disappear when it’s felted:

Overall, machine knitting is great. It’s a new process that I’ve picked up along the way. But…. I wasn’t happy with how plain the surface was, once it was felted. I wanted something more.

This led me to manipulate the surface before I felted it.

So, I sewed with an acrylic thread a particular stitch.

Then I pulled it tight and then felted it.

I truly LOVE the textures that resulted. The fabric is as soft as butter. It’s really lovely.

Along the way, I realized that I didn’t want to have precisely straight tubes. Looking back on this, I’m not sure when this sentiment arose. I took a workshop with Angelika Werth, who is an amazing artist and expert tailoress, who worked for Yves Saint Laurent. She inspired me in so many ways. Perhaps it was during that workshop.

So, I started cutting this fabric.

And sewing it back together to create forms.

As I was testing this with the projection mapping and graphics, I realized that some things just weren’t working together as I had hoped. While I loved the texture, it seemed to still distract from the graphics. As well, the form needed quite a bit of work.

I decided to go back to working with the wool roving that I felted. I loved the texture of this fabric and it was more minimal.

Three things happened to make the process of generating this fabric easier.

1. After the workshop with Angelika Werth, I realized that she used wool batting to generate her fabric for her dresses. Wool batting is a few steps earlier in the process to generate wool roving. See, with wool roving, the fibers are all combed, cleaned and in the same direction. Thus, one can pull out a tuft of roving quite easily to then lay it out. Wool batting is where the fibers are not super cleaned, nor combed in the same direction. When you order it, you get almost a flat cloud of wool that is folded in layers. Felting with wool batting makes the process of laying out the fiber go much more quickly. It also felts together a bit more quickly.

2. Originally the exhibition on Governors Island was going to open in May. Suddenly my timeline was not as long as I thought. In speaking with my wool supplier, they happened to mention this processor in Sharpsburg Kentucky, FeltLOOM. They create these needle felting machines that are super cool. But waaaaay out of my price point. Plus, I don’t have the space for it. Yet, after chatting with them, they were willing to needle felt my wool batts into prefelt. After they were prefelted I could take them through the final process of fulling, getting the texture that I wanted. This saved me the time and labor of laying out all of the batts, wetting them down and rolling them. Hooray!

3. With the grant from NYSCA, I was able to buy a felting machine – Gentle Roller. This is great as it saves me back the physical labor of rolling. Hooray!

All three of these coupled together makes the process of generating so such a quantity of custom felt fabric exponentially easier.

Now, it’s just sorting out the final forms of the fiber structures.

I did some visual research and reading, checking out a number of books. I came across an interesting pattern in a book by Tomoko Nakamichi. It was a fairly advanced pattern without the basics. As I studied this pattern, I went down several different paths trying to ratify it.

(Since my wool is so “expensive” in generating, I’ve been practicing on polar fleece to get my head around what I am doing. We happened to have a plethora of fleece from one of our famed Halloween parties. It’s been sitting in our home for a few years, so I just commandeered it.)

I was experimenting with tuck stitches. These were double tuck stitches. After (somewhat) mastering this, I realized this was going to take waaay too long.

Single tuck stitches were much easier. Also a bit more “airy” in design.

Still, this was quite far from the pattern in Nakamichi’s book. :/ As well as what I was thinking of. I wanted some “lift” on the surface, without being too busy.

After several weeks, I reached out to a couple people in the NYC Textile scene and was connected with Ann Slavit. She does amazing large scale soft installations. I heard her speak to the Textile Study Group of New York back in 2019. In drafting my email to her, a couple soft light bulbs went off. I revisited the pattern in Nakamichi’s book and gave it a (very slow) whirl with my ruler and masterbow divider (aka compass). Then, several more lightbulbs went off and I was able to follow Nakamichi’s breadcrumbs.

With this knowledge, I decided to give it another go on a larger section of material and multiple shapes.

I was starting to get more dimension, shape, and lift.

I still have things to tweak and refine. (I do NOT want to look like one of those spiketus-rex backpacks). So, now I am playing with the style and size of polygons, as well as angles to generate the final patterns to then cut and sew my felted wool out of.

So, it’s been quite a journey getting here. !! Lots of prototypes, experiments and explorations. It can be frustrating that the process is not a clear shot. But, the beauty of the process is all of the things you pick up along the way. I’ve picked up a new medium (machine knitting), new tools (felting machine), new service (FeltLOOM), new sewing and surface manipulation techniques, in addition to a slew of stories. My arsenal is much larger, as is my material vocabulary. Already I can see and feel future pieces growing with this knowledge. 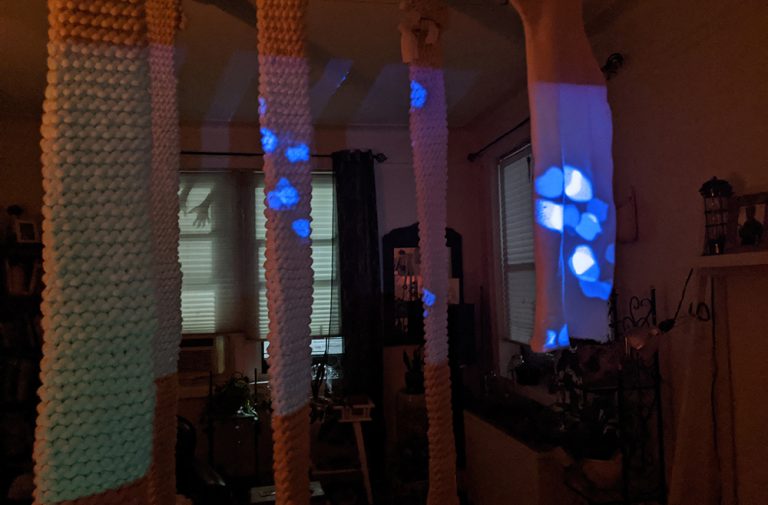 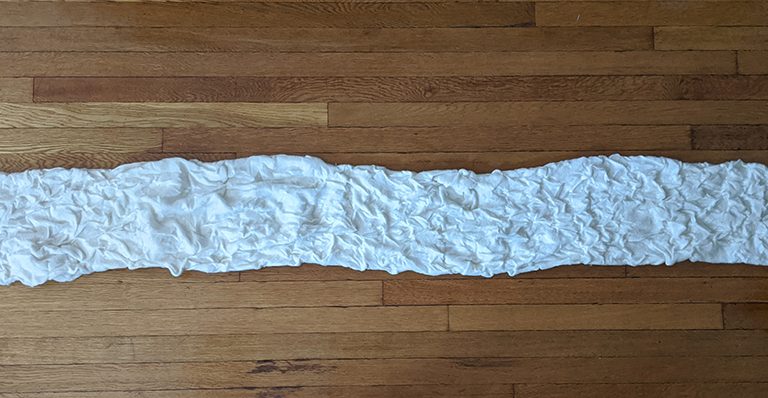